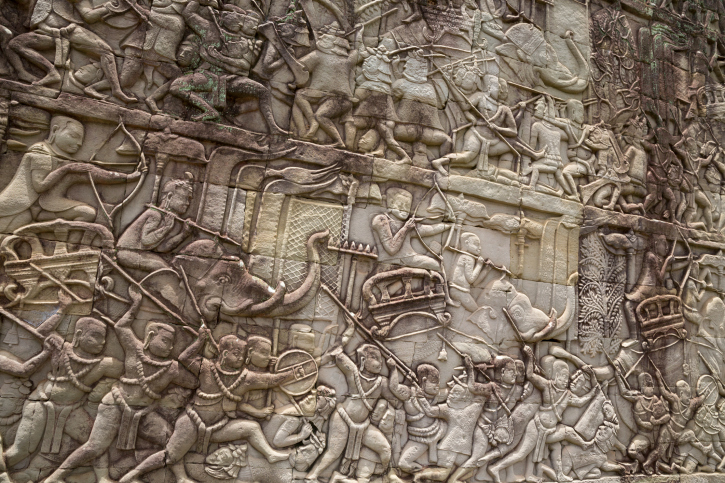 Another point to consider when contemplating the ethics of herem in the Old Testament is that the modern reader should not and cannot impose modern standards of morals on a people who lived 3,500 years ago.  The Old Testament “naturally reflects the customs and practices of a time and social context very unlike ours.”[1]  The question that should be asked is how did Israel interact with the surrounding nations in warfare as compared with how they acted?  No matter how atrocious Israel’s war conduct seems to the modern reader, it was relatively mild when compared to many of the other cultures.[2]  For Israel “slaughter out of sheer lust for blood, which often features so repulsively in the Assyrian inscriptions, is unknown.  Similarly there is nowhere any mention of the raping of women by Israelite warriors.”[3]

The Israelites were not the only nation to practice the herem.  “The root hrm ‘to consecrate,’ occurs in almost all Semitic languages.”[4]  All the nations of the Ancient Near East were familiar with the term.  In Israel and Moab there was a common practice of herem in warfare and even a common tradition for telling it.  It is probable that the neighboring nations practiced the herem also.[5]  The Moabite Mesha Inscription is an example, which is a victory stele upon which the king, Mesha (9th B.C.), describes his victory over Israel.  It says:

Now Kemosh said to me, ‘go seize Nebo from Israel, So I went at night and fought against it from the break of dawn until noon.  I seized it and killed everyone of [it], seven thousand native men, foreign men, native women, foreign women, concubines – for I devoted it to ‘Ashtar-Kemosh’[6]

The Mesha Inscription is special because it is one of the few text, found on Canaanite soil, which clearly mentions the ban.[7]  Assyria is one nation that unmistakingly used the ban in their warfare practices, much like Israel.  The Hittite army (14-13th B.C.) would many times totally destroy the enemies and their cities.  They did this because the Hittites viewed the defeated city as dedicated to their gods and inaccessible to men.[8]  Mari is another example where the idea of herem was in place.  Instead of using the word herem they called it “eating the taboo” or “asakku.”  In one text a tribal chief addressed the ruler of Mari and said that if any of the soldiers took spoils from the city after the battle they would have “eaten the asakku” of the gods Adad and Samas.[9]  If a soldier was to have “eaten the asakku”, that was dedicated to the king or a god, it could bring guilt upon themselves and the death penalty.[10]  As one can see, Israel was not strange or malevolent in their practice of warfare.   These examples show that it was not uncommon in the Ancient Near East for the idea of herem to be practiced in warfare.  It was a wide spread cultural practice by many of the nations and in fact the Israelites were even mild tempered in their warfare compared to other nations such as the Assyrians.

Not only did the Israelites not conduct their war campaigns in a malicious fashion, but they did not glorify war beyond its proper place.  Israel was not a war hungry nation that terrorized the land and boasted of their accomplishments.  It is true that when David killed Goliath people celebrated and sang, “Saul has killed his thousands and David his ten thousands,” (1 Samuel 18:7).  But there is no mention of monuments in the Old Testament that have inscriptions declaring the victory of a king or general.  Nor is there pictures showing the Israelites standing victorious over the slain enemy.[11]  In fact, many times the victory of the battle was attributed to God as the warrior who defeated the enemy (cf. Exodus 15:1-20; Judges 5; 7:2, 7).  The Old Testament gives examples of men being judged for acting cruelly in war (cf. 1 Kings 2:5-6).  Israel was not blood thirsty.  They did only what they had to and what culture and God commanded and when someone went beyond that predetermined line, they were judged for it.

Another significant fact is that if a Canaanite feared God and wanted to repent of their wickedness and turn to Yahweh they would not be destroyed but forgiven and accepted.  This is the story of Rahab.  She was a Canaanite who lived in the city of Jericho, a city doomed to destruction, and yet she put her faith in Yahweh and was spared.  This reminds us of the story of Jonah.  God was going to destroy the city of Nineveh and yet when they repented, God relented.

As one can see, God could let Israel make war with other nations, even if that means totally destroying that nation.  This could take place because of many factors that made it acceptable for Israel to act in such a fashion.  The problem is less troublesome when one takes into consideration the fact that other nations were practicing the same war strategies against other nations and Israel.  Not only were the other nations utilizing the herem, but they were also more brutal than the Israelites in warfare.   Also, an important point to note is that God was using Israel to judge the nations for their wickedness.  As one studies the idea of war, one can see that it was not as ruthless and sinful as one might think.

[6]Niditch, 31.  For another example of Moab (this time king Ataroth) employing the use of the herem cf. Kang, 81.