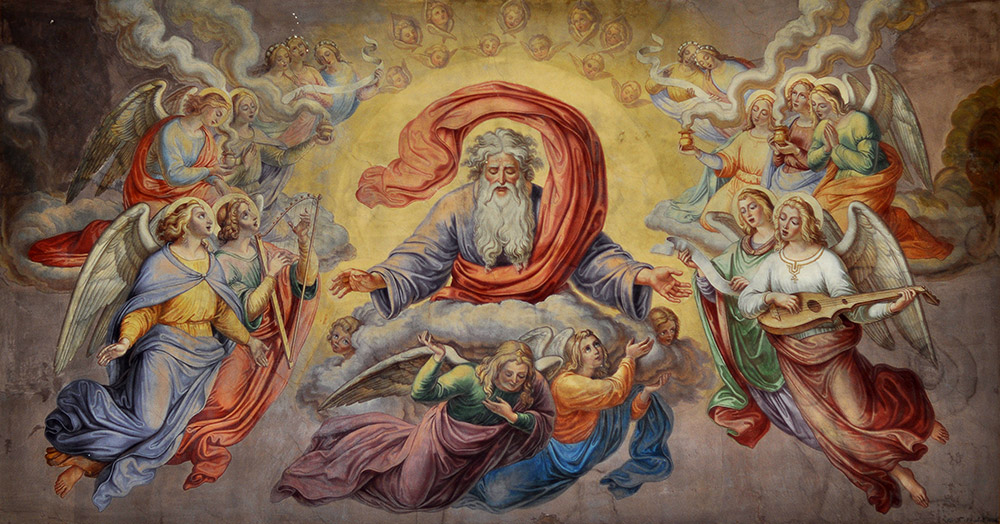 After the Psalmist calls on God to act in verse 11 he then expresses his trust in God to act because He is the God who created the world and brought the primordial chaos to order.[1]  The psalmist thinks that if God is able to conquer the powers of chaos then God will also be able to help defeat the chaos that is plaguing their lives.  There are two main ways that chaos is talked about in the Bible.  The first is that chaos is a mass lacking control and God creates by taking these building blocks and ordering and separating them to create the universe.  This can be seen in Genesis 1 when it speak of God “separating the waters.”  The other is where chaos is seen as a living being, a beast (e. g. Rahab, Tannim, Leviathan, Behomath, Yam) that needs to be defeated so God can continue creation.[2]  In this Psalm, there are both uses of chaos.  Verses 13-14 speak of God defeating beast while vv. 15-17 speak of God saying, “you dried up the ever flowing rivers,” (v. 15) and “separating light and darkness” (v. 16).[3]

In the Ancient Near East, when people first starting formulating their beliefs of creation, they saw creation as “conflicts between divine powers.”  For example the changing of the seasons was seen in Canaanite religion as a recurring battle between the god of life and fertility, Ba’al, and the god of drought and death, Mot.  In the urban areas of Egypt, Canaan, and Babylon it was believed there had been a primordial battle between a god of chaos and a god of cosmic order.  The Israelites took these beliefs and transformed them to fit their beliefs about God.[4]  It is important to note that the Israel’s understanding of the world was not influenced by the chaos conflict myth.  It merely belonged to the “treasure-house of poetry, on which poets and prophets liked to draw in order to clothe their thoughts in rich apparel.”[5]  The story of God taming chaos is how the Ancient Near Eastern people understood the world.[6]  Yet, the myths were not invented to describe how the world came into being.[7]

The allusion to the Leviathan (v. 14) is a reference to a mythical seven headed dragon from Ugaritic texts that in those traditions their god slays.[8]  The Leviathan myth in Israel said there was a dragon who oppressed humanity and “blasphemed deity” but was finally overthrown.[9]  The language of Psalm 74 is very similar to the Ugaritic tale of Ba’al defeating the Leviathan:

Though thou didst smite Ltn [Leviathan] the Primeval Serpent,

And didst annihilate the Crooked Serpent,

The Close-coiling One of Seven Heads,

The heavens will dry up, yea, languish;

I shall pound thee, consume thee, and eat thee,

Thou shalt indeed go down into the throat of Mot, the Son of El.[10]

In the Ugaritic myths when Ba’al would win his battles over primordial chaos construction on a temple would ensue.  Thus in this Psalm, the implied outcome of God’s victory over chaos is a new temple since their previous one had been destroyed.[11]  The Psalmist writes this Psalm knowing the trouble they are in and has hope in God’s future saving deeds because of his saving deeds (conquering chaos) of the past.[12]  This Psalm has a “cosmogonic motif” that connects the enemies of chaos in the Psalm with the enemies in the chaos myth.[13]  Thus the psalmist used the combat myth for a sociopolitical function in connection with the Jerusalem temple.[14]  What separates this psalm from Psalm 89 and Job 26 is that the Leviathan is not just captured but killed in this psalm and fed to the creatures of the wilderness (cf. Is. 51:9; Psalm 89:10; Job 26:13).  This is interesting because in primordial times the world was made of sea and wilderness.  The Leviathan was a sea creature thrown into the wilderness to be eaten.[15]

One of the problems with this myth is the question of what is this event describing.  There is not a census among the scholars, but Anderson sees verses 13-15 as probably speaking of the creation event, but says it is possible the psalmist is referring to the Heilsgeschichte and Exodus event.[16]  Gunkel says these verses have traditionally been related to the Exodus, yet this scene is set up at the creation of the world.[17]  While scholars have their different views, it is hard to say for sure what the psalmist was intending.  Whether the creation myth was just seen as a creation myth or if it had a double meaning as speaking of the Exodus, it would not change the function of the myth within the psalm.  Either way, the myth was put in there to express their trust in God and to acknowledge that God defeated the powers of chaos in the past and he can defeat the powers of chaos (their enemies) in the present.

[1] Endres sees this psalm not primarily as a lament but as a creation psalm.  He says that creation psalms cannot focus on creation without acknowledging the painful reality of the world they lived in (108).  This view of ordering or taming chaos would contradict the Christian belief in ex nihilo (creation out of nothing).  Bontig believes that creation can not be ex nihilo.  Sjoerd L. Bontig, “Chaos Theology:  A New Approach to the Science-Theology Dialogue,” Zygon 34 no 2 (June 1999):  324-325.